120: Finding What Matters with Mark and John Cronin

John and Mark X. Cronin are the father-son team that founded John’s Crazy Socks, the world’s largest sock store. John is an entrepreneur who just happens to have Down syndrome. You may know them for being named EY Entrepreneurs of the Year or testifying before Congress or speaking at the UN. You may know them because John became “Sock Buddies” with President George H.W. Bush. Or you may know them for having grown a bootstrapped start up to a multi-million dollar business in four years.

John’s Crazy Socks is an internationally recognized social enterprise with a mission to spread happiness and show what people with differing abilities can do.

Their mission infuses all aspects of their business. More than half their employees have a differing ability. Their Giving Back Program starts with a 5 percent pledge of profits to the Special Olympics and has raised over $450,000 for their charity partners. They have attracted over 27,000 online reviews five start reviews.  John’s Crazy Socks has over 240,000 Facebook followers and 55,000 Instagram followers.

You will love their socks, but the socks are just the physical manifestation of the happiness they share.

John Cronin is a 24-year-old entrepreneur who happens to have Down syndrome. John is the co-founder and Chief Happiness Officer of John’s Crazy Socks which has a mission to spread happiness and show what people with differing abilities can achieve.

As a business leader, John has created a business where more than half the employees have a differing ability. John’s Crazy Socks has shipped over 270,000 orders to more than 85 different countries and earned over 27,000 5-star online reviews. John was the first person with Down syndrome to be named an EY Entrepreneur of the Year.

John is a fierce advocate for people of differing abilities and has testified twice before the U.S. Congress and spoken at the United Nations. He became “sock buddies” with former President George H.W. Bush and has been featured guest on national news programs. Speaking engagements that John performs with his father and co-founder Mark have taken them across Canada, the U.S. and Mexico and they are part of the U.S. State Department’s Speakers Bureau.

John is a member of the Board for the National Down Syndrome Society and the Athlete’s Congress for New York Special Olympics.

Mark X. Cronin is the co-founder, along with his son John, of John’s Crazy Socks, a social enterprise with a mission to spread happiness. His leadership has demonstrated that pursuing social goals – demonstrating what people with differing abilities can achieve and giving back – makes for good business.

Mark advocates for the rights of differently abled people. His advocacy work has seen Mark testify before Congress twice, speak at the UN and make numerous trips to Capitol Hill. Mark is a sought-after speaker having spoken at events across the U.S., Canada and Mexico.  Mark is part of the U.S. State Department’s Speakers’ Bureau.

Mark served as the Chief Operating officer of multiple health care management and technology firms, founded a software company, organized political campaigns and worked as a Congressional aide. Mark began his career as a schoolteacher and has taught in graduate schools as well.

Mark has an undergraduate degree from Holy Cross and a Masters of Public Policy from the Kennedy School at Harvard University. He has been named an EY Entrepreneur of the Year and is a member of the CEO Commission on Disability Employment and a Board member for the Long Island Chapter of the Entrepreneurs Organization.

When we serve humanity and help raise the vibration of those around us with love and kindness, the world can’t help but be a better place. When we are in service and give freely, we receive so much more back. When we share from the heart, our success is abundant.

3:48 - Mark and John share with us how John’s Crazy Socks started from necessity and a young man’s desire to work with his father.

6:40 - John shares the options he came up with to have the opportunity to have a job he loved and work along side his dad.

8:45 - Mark describes how they started John’s Socks and what the first few years were like for them.

10:48 - John’s Socks is a social enterprise.With both a social mission and a business mission, they have found a way to serve the world in a bigger way.

12:20 - Mark explains the driving force for him to start a business and the different ways it came together for him.

14:23 - Mark always had a calling to make a difference in peoples life. He and John both love to spread happiness to the people around them.

16:08 - Look at what people can do and don’t focus on what they can’t is the philosophy at John’s Socks.

18:50 - John and Mark have been true partners throughout John’s life and that partnership works because the need each other.

21:50 - John and Mark want to live in a world that supports each other and come from a place of love, trust and happiness.

25:36 - John shares with us why it is so important to have a happy world and his desire to contribute.

29:02 - John’s favorite pair of socks is the Down Syndrome Super hero socks that he personally designed.

30:23 - Mark tells us to find something that matters to us and follow through with it one step at a time. 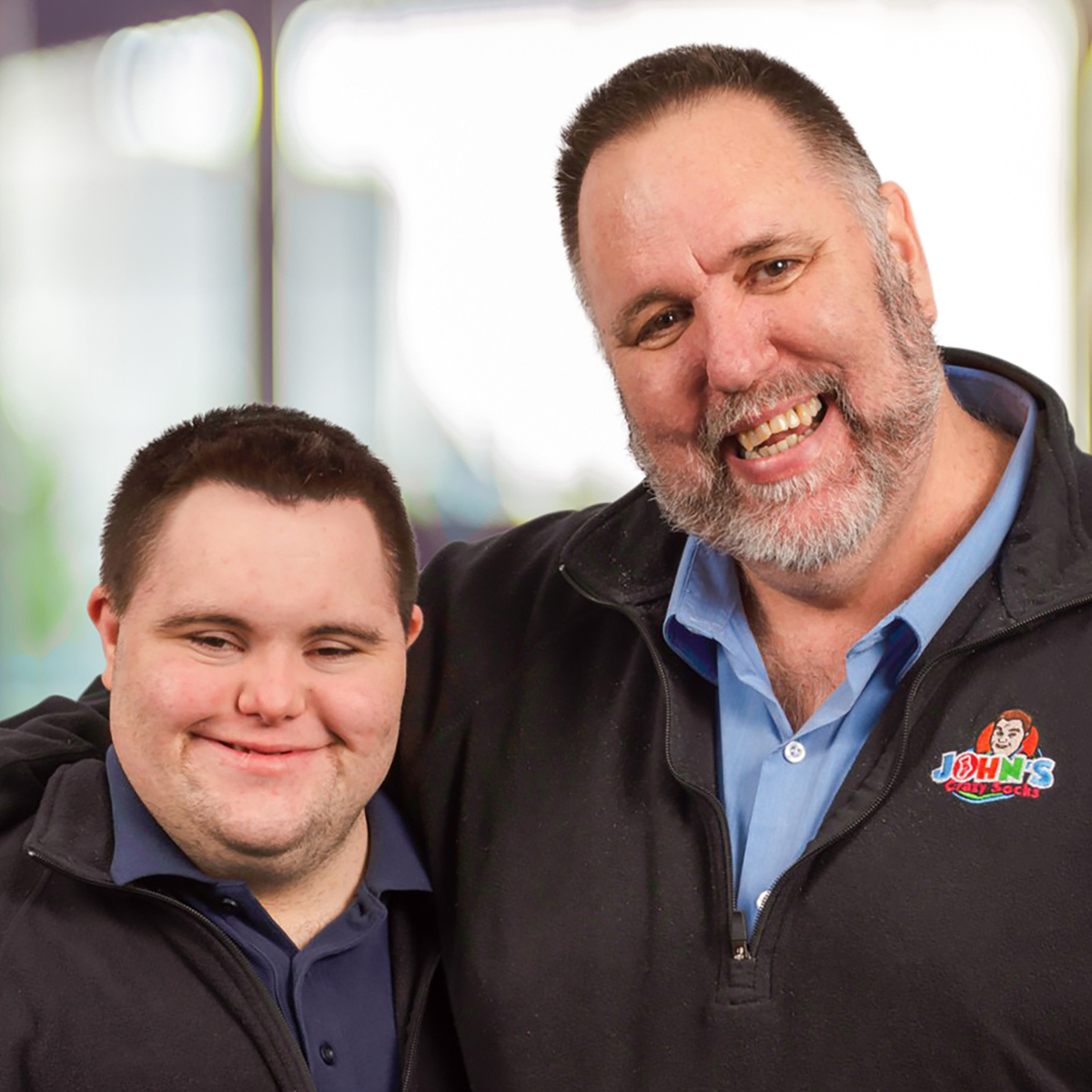